The uilleann pipes  are the characteristic national Bagpipe of Ireland. Their current name (they were earlier known in English as "union pipes") is a part translation of the Irish language term píoba uilleann (literally, "pipes of the elbow"), from their method of inflation. The uilleann pipes are distinguished from many other forms of bagpipes by their sweet tone and wide range of notes together with the unique blend of chanter, drones, and regulators.
The bag of the uilleann pipes is inflated by means of a small set of bellows strapped around the waist and the right arm.
The bellows not only relieve the player from the effort needed to blow into a bag to maintain pressure, they also allow relatively dry air to power the reeds, reducing the adverse effects of moisture on tuning and longevity.
The chanter is the part of the instrument that plays the melody. It's somewhat like a low whistle except it is not placed in the mouth. Air is pumped through the bellows which is attached to the player's right elbow, hence the name.To achieve the "bottom D" the chanter is lifted off the knee, exposing the exit of the chanter's bore, where the note is produced. The chanter is set on the right knee thus closing off the bottom hole. Many players use a strip of leather placed over the knee, called a "popping strap," which provides for an airtight seal.
A great range of different timbres can be achieved by varying the fingering of notes and also raising the chanter off the knee, which gives the uilleann pipes a degree of dynamic range not found in other forms of bagpipes. A type of simultaneous vibrato and tremolo can be achieved by tapping a finger below the open note hole on the chanter. The bottom note also has two different "modes", namely the "soft D" and the "hard D". The hard bottom D sounds louder and more strident than the soft D and is accomplished by applying slightly more pressure to the bag and flicking a higher note finger as it is sounded. Many chanters are fitted with keys to allow accurate playing of all the semitones of the scale. Most uilleann chanters are very responsive to "half-holing" or "sliding", which is the practice of obtaining a note by leaving a fingerhole only half covered. This is why many chanters sold in Ireland are sold without keys. The chanter uses a double reed similar to that of the oboe and bassoon.
The regulators are equipped with closed keys which can be opened by the piper's wrist action enabling the piper to play simple chords, giving a rhythmic and harmonic accompaniment as needed. .
History
The uilleann pipes developed around the beginning of the 18th century, the history of which is here depicted in prints of carvings and pictures from contemporary sources. The earliest surviving sets of uilleann pipes date from the second half of the 18th century but it must be said that datings are not definitive. Many of the early players in Ireland were Protestant, possibly the best known being the mid-18th century piper Jackson from Co Limerick. The pipes were certainly frequently used by the Protestant clergy who employed them as an alternative to the church organ.

Tuning
The instrument most typically is tuned in the key of D, although "flat" sets do exist in other keys. These terms only began to be used in the 1970s, when pipemakers began to receive requests for pipes that would be in tune with Generation tin whistles which are stamped with the key they play in: C, B♭, etc. The chanter length determines the overall tuning; accompanying pieces of the instrument, such as drones and regulators, are tuned to the same key as the chanter.
The D pipes are most commonly used in ensembles, while the flat-pitched pipes are more often used for solo playing. It is noteworthy that Irish music was predominately solo music until the late 19th century, when these fixed-pitch instruments began to play more of a role. 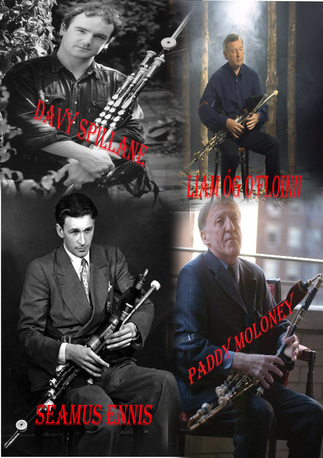 Davey Spillane of Moving Hearts has also recorded solo albums. Liam Óg O Floinn of Planxty has also featured as soloist with Shaun Davey in The Brendan Voyage and with RTE orchestras. Paddy Maloney is with The Chieftains. Others from past and present include Seamus Ennis, Paddy Glackin and Paddy Keenan.