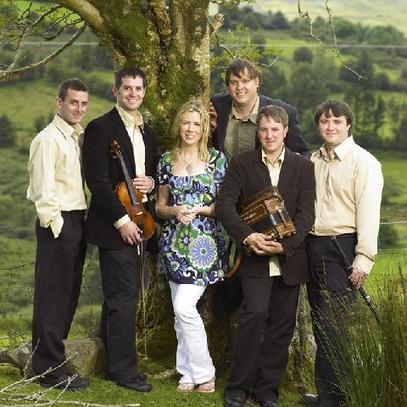 DANÚ are an Irish traditional music group based in an Rinn/Ring, Co. Waterford, made up of seven traditional musicians, hailing from counties Waterford, Dublin, Kerry and Donegal. Named Danu after the Celtic Goddess, the group have a strong ethos of loyalty to the tradition from which their music comes and yet still bring a fresh,  inspiring approach to their performaces. In 2004 Danú won the BBC 2 Folk Award for "Best Group". At the same awards the
song "The County Down" by Tommy Sands that Danú
had recently recorded won
"Best Song".
A wonderfully lively group on stage, a DANÚ concert is a unique experience.

Songs
Muireann Nic Amhlaoibh is the lead singer, and plays flute and whistle with the band. She sings in English and Irish, in folk and Sean Nós traditions. In "Molly Na Gcuach Ní Chuilleanain" , from the Seanchas album (2010), evidence of these traditions is present. She sings in Irish, with ornamentation starting slowly with free metre like a Sean nós song, with an accordion drone for accompaniment. After the 2nd verse, a fixed  metre almost sneaks up on the listener as the guitar eases into  gentle 6/8 accompaniment augmented by  backing vocals. However in live performances she sometimes sings the whole song in a fixed metre with only bodhrán for accompaniment. Indeed the singing style varies slightly from performance to performance, itself a feature of Sean Nós. The method of starting a song in a Sean Nós style and changing to contemporary folk as the song develops is very common in their songs, although muireann never loses the ornamentation.
All of the above is found in the song "An Seanduine" from "When all is said and done" 2005. Adapting a song from its traditional free metre to a more folk-like steady pulse is dealth with here by alternating time signatures. While the main time signature is 6/8, there are regular 9/8 bars to make the words fit.
Not all Danú songs are from the ancient Irish tradition. County Down is an example of a contemporary folk song written by Tommy Sands. Again there is a balance between Sean nós and folk in the singing of this song. Other examples of songs by Danú include The boys of Barr na Sráide  a gentle ballad featuring finger picking guitar accompaniment and An spealadóir which as a lively 6/8 song is often performed as part of a Jig set.
Song Accompaniment
Guitar and bouzouki are the main accompaniment instruments but the melodic instruments, flute, fiddle and accordion play their part in giving the songs colour and direction with added harmonies and counter-melodies.Danu accompaniments always develop throught the song. The bouzouki adds a another layer and at times a counterpoint to the guitar. Fiddle, flute and accordion often fill out the background with simple harmonies or by playing parallel 3rds and/or 6ths, and at times counter
melodies. Instrumental breaks are usually inserted into the middle of songs for
further development
Tom Doorley is the flute-player, and often acts as the spokesman for the band on stage. He has also played live with Men At Work, playing their hit single Down Under. He is a story-teller and works as a teacher and lives in Dublin.
Dónal Clancy is the guitar player for the band. He was one of the original members, and after several years pursuing a career with Solas and touring with his father, balladeer Liam Clancy.
Oisín McAuley, a previous member of Stockton's Wing, plays four- and five-string fiddle with Danú. He has recently released a solo album of fiddle music.
Éamon Doorley plays bouzouki and fiddle, and is the younger brother of Tom Doorley. His bouzouki playing has a strong emphasis on countermelody.
Donnchadh Gough plays both bodhran and uillean pipes in Danú
and Benny McCarthy plays box (button accordion).
The many instrumentals are equally interesting and incredibly vivacious. "Are you ready yet" from "Think before you think" album is actually 4 tunes, Are You Ready Yet?/The Tailor's Thimble/Donoghue's Reel/I'm Ready Now! Almost 5 minutes long, it continues to build the whole way through. Just when you think you've reached the high point, it build again. This is a very cleverly structured tune variation in keys, instrument combinations, tempi and rhythmical accompaniment all add to the excitment. Begining with open 5ths on Bouzouki under a flute solo, composed by Tom Doorley. A reel at a gentle tempo, his is a good example of Doorley's style. Lots ot traditional ornamentation, slightly classical trills and a touch of flutter-tongueing before a faster tempo gives the first lift, aided by the addition of more rhythmic bouzouki and guitar accompaniment and bodhrán. Before the listener has a chance to lose attention, the 2nd tune in a new key, on the fiddle keeps up the interest. The harmony on the flute, sometimes parallel and sometimes counter melody,  at this point is typical Danu. Time for a new tune, new key, new instrument, the box. Again the flute harmonies feature. For the last tune, again in a new key, the full group play together at top speed as the danu sound is achieved.
Garech's wedding from album employ's similar variation principles to gain direction and a build up in intensity. Again 4 contrasting tunes are used here, Garech's Wedding / Reel Gan Ainm / The Moving Bog / Cliffs of Glen ColmCille. The main difference here is that the first tune is a slip jig, followed by 3 reels in 3 different keys all chosen to give the music a lift.
The Danu style of accompaniment and interest in structure serves even modest tunes like "Kerry Tunes" a series of polkas well.
Jackie Coleman's and Sean sa cheo (whistle) are 2 of the tunes heard here in "Danu Clips" (you tube). Once again, top class playing at breackneck speeds, together with interseting instrumental combinations, rhythm and variety of keys is the order of the day.
Garech's Wedding / Reel Gan Ainm / The Moving Bog / Cliffs of Glen ColmCille
Documentary - Irish band Danú accompany the Taoiseach (prime minister) on a trade mission to India in January 2006, meet some great local musicians and get around town to explore and meet people, with a few surprises on the way! Includes footage from inside the Taj Mahal Palace in Mumbai in all its glory prior to an attack by terrorists on November 26 2008