Background
Céilí bands are a relatively new phenomenon, gaining popularity in the first half of the 20th century, playing solely for Irish dancing. The first céilí was organised in 1897 in London by the Gaelic League. A typical Céilí Band had around 10 instruments including accordion, fiddle, flute, concertina, harmonica, uilleann pipes, banjo, mandolin, tin whistle, drums and piano. However as their popularity  spread throughout Ireland, England and USA, any melodic instruments were used. Notice the saxophone in one of the photographs on top of this page.
More players were needed so the music could be heard  by everyone in a large hall over the noise from dancing feet especially in large  venues. A variety of dances were used for each Céilí including  jigs, quadrille sets, hornpipes and waltzes among others.
The Dance Halls Act of 1935 outlawed dancing at the crossroads and all dances had to take place in parish halls after a licence had been granted.  Céilí music was broadcast on radio in the 30’s ad 40’s and it was kept popular by Irish made recordings in the 1950s
and also by the Fleadh Cheoil. Today, Céilí Bands are regularly heard in a concert setting.
Main Features 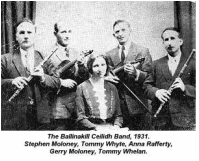 Ballinakill Céilí Band
In 1927 that a group of Irish traditional musicians got together under the guidance of the parish priest, Father Larkin, and formed the band that was to become well known worldwide. ​November 1st 1929 they made their first broadcast for 2RN, as Raidio Eireann was then known. The following summer, in July 1930, Parlophone of London recorded The Pipe on the Hob, the Queen of the Rushes, The Old Bush Reel and The Copperplate Reel. Following the unexpected success of the record sales the band make six double-sided records in November 1931.By 1941-42, with record sales in the tens of thousands, the Ballinakill Ceili Band had achieved international fame.The band was very influential and remained active until the 1960s. 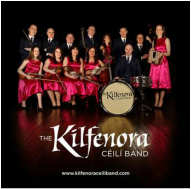 Another successful band are the Kilfenora Céilí band which was formed in 1910 in Clare and are still active today. They recorded “The Fabulous Kilfenora Céilí Band” and “The Kilfenora Céilí Band”. They won the "All-Ireland Fleadh Cheoil" titles in a row, in 1954, 1955 and 1956 and in the 1960s they  played in England regularly to large crowds at halls in Manchester, Birmingham and London.
Their latest album "Now is the hour" was recorded in 2015. In recent times they achieve a more contemporary sound with viola, cello, double bass and a vocalist Don Striffe.
A full history of the band and of music in North Clare is on view at the Kilfenora Céilí Band Parlour, located in the Burren Centre, Kilfenora. (This is the only museum in the world that we know of dedicated to living musical artists, with a wealth of exhibits and audio-visual elements, which was formally opened by the President of Ireland in March 2015.)