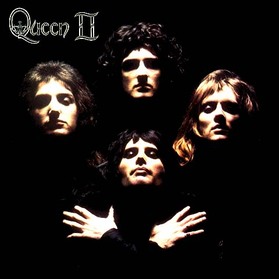 The single was released on  31/10/1975 from the album, A Night at the Opera, which was released on  21/11/1975. The single spent 50 weeks in the U.K. charts and 56 in the U.S. reaching No. 1. It took 3 weeks to record-7 days just on vocal overdubs, but it was pre-composed by Freddie with harmonies written out etc. before it was taken to the recording studio. In 1975 it usually took about 3 weeks to record an entire album!
3-minute singles were the norm and many felt that  a 6-minute song could not be a success. D.J. Kenny Everett played it 14 times in  one weekend on Capitol Radio, and by Monday, EMI were loaded with  orders for a single that hadn’t even been released yet! It was the first time an Opera section had been included in a Pop/Rock song.
“No Synths”was printed on the album covers because they felt that many people couldn’t heart the difference between a multi-layered guitar and a synthesizer. The guitar was considered as an orchestral instrument rather than a raunchy one and May spent hours layering and harmonising guitar tracks.

Style or Genre.What makes Bohemian Rhapsody unique for its time is that it can’t be confined to one style or genre. It is a  mixture of styles including Rock, Pop, Classical choral, Opera added to revolutionary recording practices.
Texture
Homophonic (block chords) in the vocals at the start.
Mostly Melody and Accompaniment throughout (still Homophonic)
A Cappella (unaccompanied by instruments) at the start, leading onto solo voice with backing vocals.
Loads of layered backing vocals throughout.
Solo voice with accomp. on the ballad type main song.
Polyphonic and antiphonal in the operatic section
Lots of overdubbing and layering of guitar and vocal parts throughout
Guitar, drums and piano appear and disappear throughout the song
Bass often doubles the rhythm guitar in the rock sections
Broken chords on piano in the “ballad” section
Block chords on piano in the operatic section
Power chords on guitar in the rock sections
Broken chords on guitar in the coda
Tonality
1st section is in Bb major starting with a chord of Bb6
Piano intro into the “ballad” section broken chord of Bb major with an appoggiatura (g)
Chord progression for the main song is I, vi, ii, V (Bb Gm Cm F)
Major chords moving chromatically on “easy come, easy go” in the introduction
Each verse of the “ballad” changes to Eb major halfway through
1st Guitar interlude in Eb Sudden change to A major at the start of the operatic section
Change back to Eb midway through the operatic section
2nd guitar interlude in Eb
Rock section in Eb
Coda in Eb but ends on a chord of F major
Vocal Style
Choral at the start.
Soft “ballad” type of singing in the main song changing to a harsher rock sound on the words “thrown it all away”. Pop-style backing vocals throughout featuring “oohs” and “aahs” multi-layered. Operatic section – multi-layered vocals featuring extreme dynamic changes, imitations and falsetto (very high pitched male singing). Harsh “throaty” rock-style singing in the rock section.
Return to the softer “ballad” type singing in the coda

Guitar
No guitar in the intro.
Enters playing a chromatic line on the words “thrown it all away” (doubled by the bass) matching the change of vocal style.
Much overdubbing and layering throughout (multi-tracking) up to 7 guitar tracks!
Features distortion, string bends, vibrato, scale passages and glissandi in the guitar interludes.
Drops out of the operatic section and plays a much smaller role in the coda

Bass
Enters on the 2 bar intro to the main song (bar 15) in semibreves (o)
Continues in semibreves in the main song
Note the glissando (slide) at
Note the rhythm (Appendix 1) under the words “now I’ve gone and thrown it all away”
Doubles the guitar throughout this section
In the operatic section the bass drops in and out like the Drums.
Again doubles the rhythm guitar in the guitar interludes and rock sections

Drums
Enters on the word “away” in the 1st verse with a cymbal crash, followed by a roll and crescendo.
Note the rhythm of the snare drum and bass drum (Appendix 2) which is know as “backbeat”.
Note the difference between the 2 verses of the main song ie drums from the start of verse 2 and ride cymbal in quavers.
Also note the drum “fills” on tom-toms and snare.
Change of drumming style in the operatic section where the drummer drops out at the soft bars and plays the rhythm of the words at the loud bars.  This is more like orchestral percussion than rock drumming.
Back to rock drums at the 2nd guitar interlude
Flam A soft gong is the final sound in the entire song

Recording Technique
Multi-tracking (overdubbing) of guitar and vocals feature prominently throughout the entire song, giving rich layers of sound
Use of distortion on the guitar to give rock sound
Panning of vocals and guitar throughout
Use of flanger on the cymbal to illustrate  “wind blows”
Phasing.
Reverb Delay
Themes & Motives
Chromatic motives act as a unifying feature tying the different sections together.
“Easy come, easy go” motif (Appendix 4) can be closely linked to various piano links (Appendix 5), “I’m just a poor boy”, the chromatic bass( Appendix6) line and the final “Any way the wind blows” at the end (Appendix 7)
The main rock motif (Appendix 8) features triplets on guitars and bass
Counter motif “any way the wind blows”

Word Painting
Flanger on the cymbal to describe the words “the wind blows”
Bell tree to describe “shivers down my spine”
Extreme dynamics and changes in texture to illustrate the “very very frightening” section.

Dynamics
Many changes of dynamics throughout showing a Classical influence, sometimes changing gradually (crescendo and diminuendo) and sometimes very suddenly, as in the operatic section.
Metre
Rubato (free) in the introduction, mostly 4/4 time, one 5/4 bar
A tempo at bar 15 (the piano intro to the main song)
One 2/4 bar in the main song
Change of tempo at the operatic section - one 2/4 bar
Change of tempo at the rock section – where 4/4 = 12/8
Return to slow “ballad” type in the coda
Rubato and rit at the end