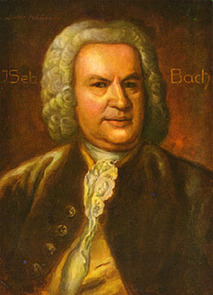 German composer, Bach is not only one of the most important composers of the Baroque era, but of the history of music as a whole. Much of his innovation in composition, especially in harmony and counterpoint has influenced generations of composers of all genres in the fime that followed his life , even to the present day. Some of his main biographical details include;
Organ lessons and Choirboy at 15.
Violinist in Weimar court orchestra.
Weimar court organist.
Director of music at court of prince Leopold in Cothen
Cantor and composer in Leizig.
198 Cantatas, St. John and St. Mathew passions, Christmas oratorio, Mass in B minor.
The Baroque era (17th to early 18th century) was a period of church rule in music. Much of the music composed at this time was religious, and was often commisioned by the church
Features of Baroque music include:
Small Ensembles of instruments. (Check first page of the score for the typical Baroque orchestra
Use of Harpsichord/Organ with cello/ bass in the continuo part, using figured bass.
Polyphonic textures. Devices such as Canon and Imitation were frequent.
Many compositions were religious.
Early use of Diatonic harmonies which are still in use today, including the circle of 5ths.
Figured Bass.
Melodies were long and elaborate using ornamentation, like trills, and turns.
Dynamics less extreme than later music; Tchaikovsky  for example. Terraced dynamics were also common.
Melodic phrases were long  with fewer cadences unlike the classical era where they were set in short 2 and 4 bars length.
Modulation to closely related keys
Other devices included Pedal notes, Suspensions, Appogiatura, Changing notes, notes of anticipation and sequences.
Word Painting. This Cantata is a deeply emotional piece where the words and the mood of the words is constantly being illustrated by using certain intervals, chords, as well as melismatic passages.
Jesu Der Du meine Selle is a Cantata, literally a piece that is sung as opposed to played. It is a religious work in 7 contrasting movements or sections. The 1st and last movements are choruses. The 2nd, 4th and 6th are Arias, while the 3rd and 5th are Recitatives.