Above is a better version from a stylistic viewpoint. However the imitations  are much clearer in the version below so it's useful listening. Also notice one uses organ in the continuo part while the other uses harpsichord. 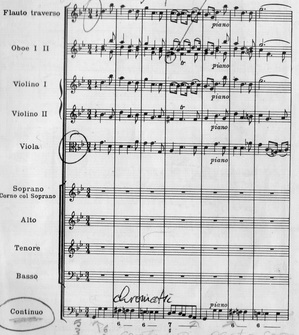 This is arguably the most important movement as it contains the Hymn tune (from the 7th movement), 3 other themes, full chorus and instrumental ensemble . The key is G minor and the time signature is 3/4. Texture is polyphonic, full of imitation. You need to know the order of all the imitations.
The 1st page of the score shows all the instruments used in the work. Note especially the continuo and figured bass.
The opening features the ritornello theme played on flute, oboe and violin set above the ostinato ( repeated musical idea) on the continuo, The ostinato is  found most often in the bass and runs through the entire movement with the exception of 6 bars.
The polyphonic texture which dominates the whole movement is set in motion right from the start as these 2 themes (melodies) co-incide.
​This movement is structured the same as the 7th movement.
Tonality with modulations are the same as the 7th movement. 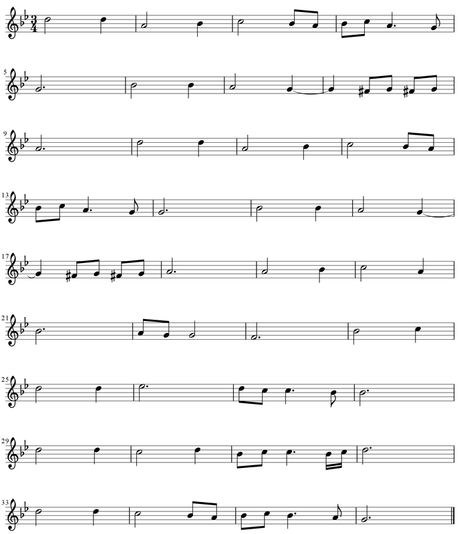 When the sopranos sing…..it’s the hymn tune. Sopranos don't take part in the imitation like the other voices. This is always doubled by flute, an octave above in this movement.

An ostinato  is a repeated musical idea and is almost always present in this movement. Features of the ostinato include repeated notes and descending chromatic movement.   You need to hear the order of voices in imitation when  the ostinato is sung . Sometimes it's Altos, imitated by tenors and then by basses but later in the movement the tenors start, imitated by altos and then basses.  The ostinato is also found in the oboe 1 part at Bar 9, then oboe 2 and later violin II, Bar 41. It's most often found in the continuo doubled by basses. The first bar of this theme is a good indication of the key at any given time, except when it’s an imitation .

Ritornello means returning. This theme returns every so often. The movement is in Ritornello form. The theme which returns features a dotted rhythm and leaps of  5ths and  6ths. It is played by flute oboe and violin.

A  new theme is introduced halfway through the movement which features a leap of a 4th followed by repeated notes. This new theme is set in imitation with a counter melody in the bass part of 2 semiquavers and a quaver. This section also features sequences, antiphon and dominant pedal notes all of which are key exam terms.

Ritornello melody played in unison by Flute, Oboe and Violin. Ostinato in the continuo part. Ends on a perfect cadence.
Oboe 1 plays ostinato, oboe 2 plays a counter melody, strings (violins and violas) play another counter melody featuring sequences in unison. Notice the syncopation on the 2nd oboe near the end of this section. Ends on a perfect cadence.
Ostinato sung by altos, imitated 1 bar later by tenors and 3 bars later by Basses. Sopranos sing the first phrase of the hymn tune doubled by the flute. The order of entries is A.T.S.B. Ends on a perfect cadence.
Altos sing the ostinato in inversion (ascending) , imitated  a bar later by Tenors.  Again Basses enter 3 bars later but this time not in imitation. Sopranos sing the 2nd phrase of the hymn tune.
Again flute oboe and violin play ritornello melody. This is followed by the ostinato on the violin with a counter melody on oboe featuring sequences. ​
Above entries of ostinato and hymn tune are repeated. Note the Dominant pedal at the end.
Ostinato is now on the strings as the tenors sing a new motif imitated 1 bar later  by altos and 1 bar later again by basses. Again hear the sequences before the soprano hymn tune and  ritornello return.A new tune featuring the leap of a 4th and 4 repeated notes is introduced by altos imitated by tenors.
This new tune is now taken on by the flute and oboe. A counter melody on strings featuring a 3 note sequence, (quaver and 2 semiquavers) is also introduced here. Also notice the antiphon between oboe and violin. These 2 motives are used extensively in the next section. There is no ostinato for 4 bars here.
Ostinato returns  in the Tenor  imitated 2 bars later by the altos and again 2 bars later by basses. Note the new order of entries T.A.B. This is followed by the next phrase of soprano hymn and another dominant pedal. Over the dominant pedal is the ostinato on oboe, imitated by flute
4'45''
The new material introduced previously is used extensively. Listen for sequences, imitations and antiphon. This leads on to the last line of the soprano hymn before a brief quote from the ritornello theme before the final cadence. Tierce di picardie!!